Pepper’s had another great event on Saturday! Working with repeat clients is always a pleasure, especially when our staff is allowed some creative freedom in putting together an event, and Saturday was no exception!

Saturday’s event was a Bar Mitzvah with a Dr. Seuss, 'Cat in the Hat' theme.As many of you can imagine the topsy-turvy world of Dr. Seuss brings out the inner child and imagination of everyone. 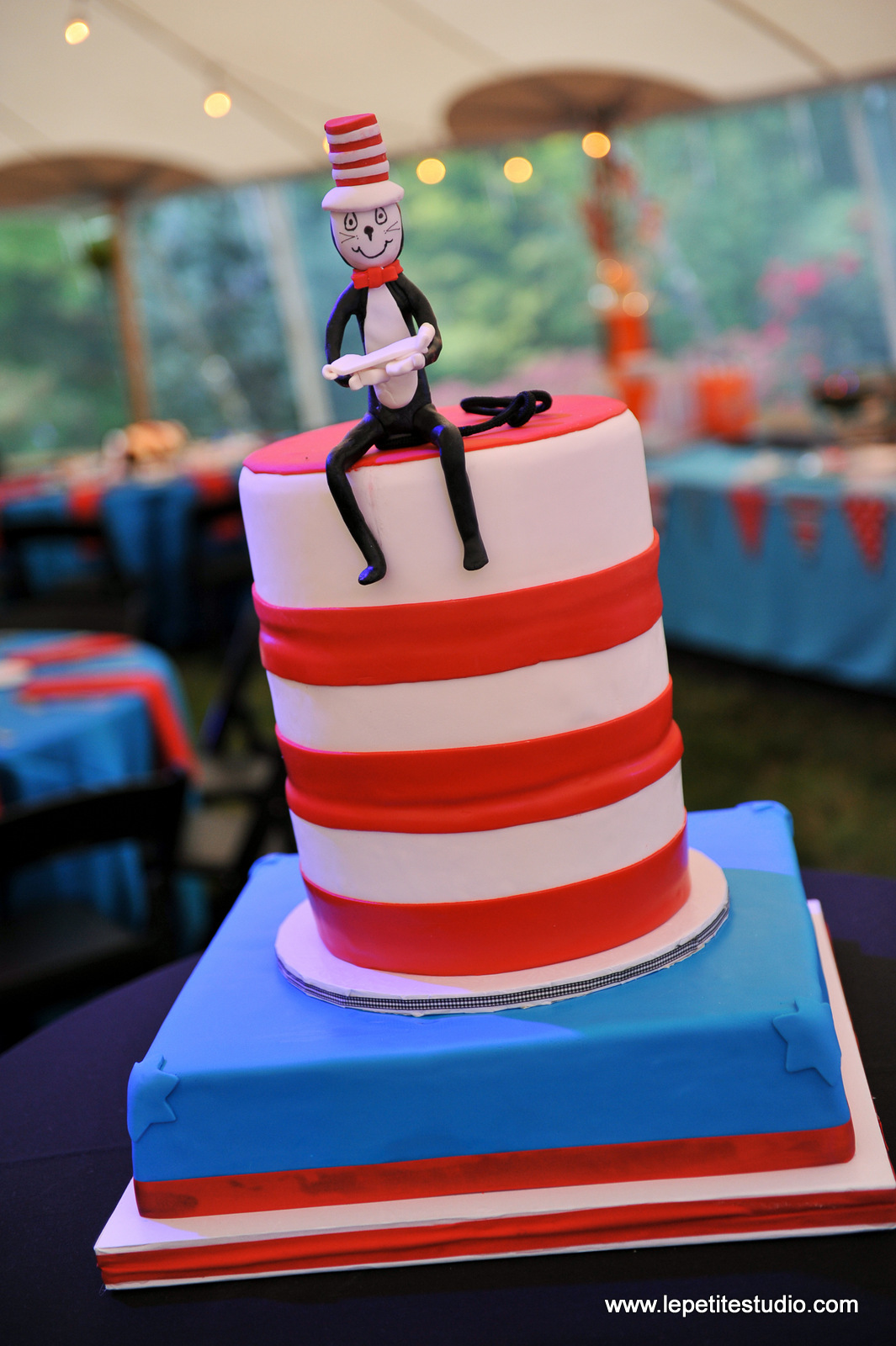 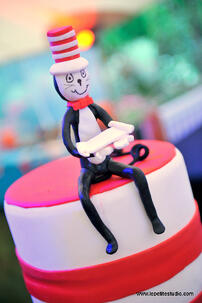 For the event, we at Pepper’s wanted to ensure that the playfulness of Dr. Seuss was evident, but also had a refined, understated look that went along with the Client’s needs. The end result was a bright, beautiful scene which had class, and the playfulness one would expect from Dr. Seuss.

Our team at Pepper’s is always looking for ways to stretch our imaginations and bring a client’s vision to life, and I think our Cat in the Hat evening was a great success!

By: Heidi Bouchard
~ Head of Style and Design ~

As Head of Style and Design at Peppers Fine Catering much of my time is spent helping couples bring the vision they have for their wedding day to fruition. Sometimes it’s helping them hone in all of their ideas and other times it’s making suggestions to help them expand on them.

Susan Lawrence, owner of Peppers, came to me to help with the June wedding of a friend and longtime business colleague. After meeting the bride I saw that she dressed in a style that was modern, feminine and sophisticated. For her wedding dress she chose a very elegant all lace dress. Her invitations, which she designed and made herself, were a soft shade of purple, shimmery, with a lace embellishment. I listened intently to her ideas for some of the DIY things she was planning. I had a much clearer picture of what she was hoping for. I built a design board for her with some of my ideas. She loved it and at the end of that final meeting I asked her to trust me and let me run with the feel of what I had outlined. She gave me 2 thumbs up and creative freedom. 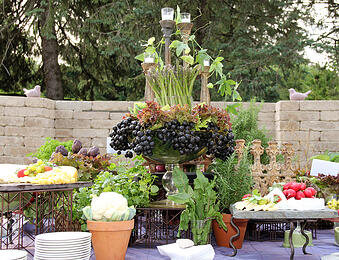 The setting was magical; the reception for 160 guests was outside under a canopy of branches from huge old trees that were lit up with soft white lighting. Along with passed hors d’oeuvres, guests were welcomed to a beautiful cheese and crudité table which I designed to be a major focal point for the cocktail hour. Instead of the typical flowers most often used to embellish a stationary hors d’oeuvre table,  I used only fruits and vegetables to build arrangements, old Iron Gate pieces added to the natural rustic charm I was trying to achieve. I decided on slate and stone to serve the cheeses, all locally crafted from here in Massachusetts. As I was putting the final touches on the display, I overheard a couple who arrived early, comment that it was “way too pretty to eat.”

When the bride and groom visited Peppers for a cake tasting, they immediately decided on the Lemonade Cake, a new flavor for the 2013 season. After an exchange of pictures and sketches it was decided that the cake would be 4 tiers, covered with a soft pink fondant and would have lace trim. When I created her design board I included a vintage rhinestone brooch which we decided to use on her cake along with several others she collected and borrowed from family and friends. There was an adorable new gazebo on the property that sat up on a hill overlooking the patio where the guest tables were, the perfect setting for the cake.      A beautiful tone-on-tone pink patterned table cloth was chosen and the cake was set on top of a huge mirror and rhinestone covered riser I had built for another event. 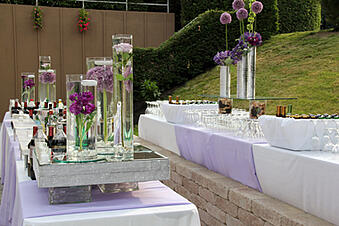 In contrast to the soft pinks and whites that were featured on guest tables and the cake table, for the bar, a bit of juxtaposition was in order. I went with purples and used large single bloom flowers anchored to the bottom of tall, varying size, glass column vases that were filled with water and lit with submersible LED lights. The groupings were displayed on mirrored risers covered in twinkling candles. The look was clean, contemporary and visually striking.

There is no greater reward than to be part of a couple's special day and help them to create wonderful memories that will last a lifetime.